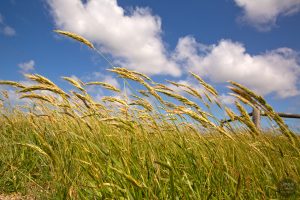 Wind is the natural flow of air that is created when changes in temperature causes air to move from high to low pressure areas. As one area heats up more than another, the difference in pressure creates wind and becomes a cycle of cool air and warm air.
When the sun doesn’t give the same amounts of light and heat to the entire surface of the earth at the same time, wind occurs. The reason for the uneven distribution from the sun is due to the fact that the Earth’s surface is uneven. The mountains, valleys, deserts and oceans all absorb heat differently. Warm and cool air both move upwards toward the atmosphere (updraft) however, because warm air weighs less, it continues to push up through the cold air.

The speed of wind is determined by how different the temperature is between cool and warm air as they push up against each other. The greater the difference of temperature, the faster the wind speed. The direction of the wind is dependent on how much friction or resistance the wind runs into as it blows.

Wind is useful in many different ways. It dries up wet areas, allowing moisture that wasn’t absorbed into the ground back into the atmosphere. Wind also helps plants reproduce by carrying their seats and pollen from one plant to another. Lastly, we use wind to help generate electricity with Windmills. Windmills are connected to a generator that connects the positive and negative charges that produces electricity. As the wind turns the blades, it generates electricity!