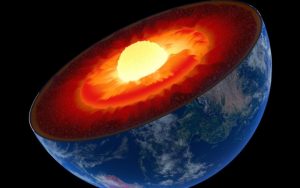 The Earth is made up of three main layers. One layer, the Earth’s core, is the innermost area of the planet and mainly a solid ball with a radius of about 760 miles. It is believed to consist primarily of iron-nickel alloy and to be the same temperature as the surface of the sun. The outer core was determined to be liquid from observations showing that compressional waves pass through it, but elastic shear waves do not. Billions of years ago when the Earth was formed, the heaviest substances sank toward the middle, which is why the inner core is comprised of some of the heaviest materials on Earth. Some scientists think that the metals in the Earth’s core are in constant motion, and that the inner core rotates faster than the rest of the planet.